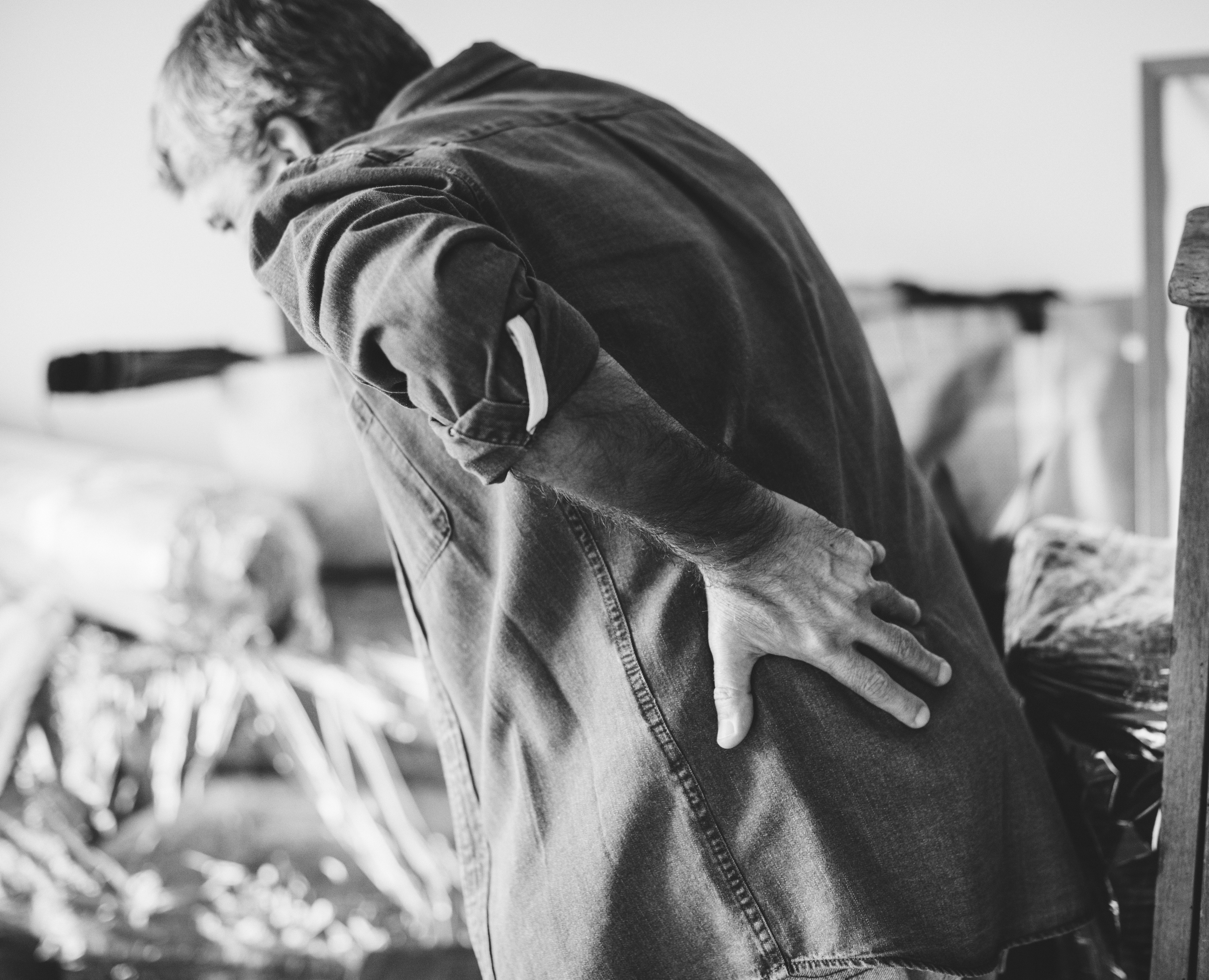 Previous item 4 most common causes of... Next item Painful and stiff - Frozen...

The spine is made up of many bones called vertebrae. These are roughly circular and between each vertebra is a ‘disc’. The discs are made of strong ‘rubber-like’ tissue which allows the spine to be fairly flexible. A disc has a stronger fibrous outer part, and a softer jelly-like middle part called the nucleus pulposus.

The spinal cord, contains the nerves that come from the brain, is protected by the spine. Nerves from the spinal cord come out from between the vertebrae to take and receive messages to various parts of the body.

Strong ligaments attach to the vertebrae. These give extra support and strength to the spine. Various muscles also surround, and are attached to, various parts of the spine.

What is a prolapsed disc?

What causes a prolapsed disc?

It is not clear why some people develop a prolapsed disc and not others, even when they do the same job or lift the same sort of objects. It seems that some people may have a weakness in the outer part of the affected disc. Various things may trigger the inner softer part of the disc to prolapse out through the weakened outer part of the disc. For example, sneezing, awkward bending, or heavy lifting in an awkward position may cause some extra pressure on the disc. In people with a weakness in a disc this may be sufficient to cause a prolapse. Factors that may increase the risk of developing a prolapsed disc include: a job involving lots of lifting, a job involving lots of sitting (especially driving), weight bearing sports (weight lifting, etc), smoking, obesity, and increasing age (a disc is more likely to develop a weakness with increasing age).

What are the symptoms of a prolapsed disc?

The pain is often severe, and usually comes on suddenly. The pain is usually eased by lying down flat, and is often made worse if you move your back, cough, or sneeze.

Nerve root pain is pain that occurs because a nerve coming from the spinal cord is pressed on (‘trapped’) by a prolapsed disc, or is irritated by the inflammation caused by the prolapsed disc. Although the problem is in the back, you feel pain along the course of the nerve in addition to back pain. Therefore, you may feel pain down a leg to the calf or foot. Nerve root pain can range from mild to severe, but it is often worse than the back pain. With a prolapsed disc, the sciatic nerve is the most commonly affected nerve. (The term ‘sciatica’ means nerve root pain of the sciatic nerve.) The sciatic nerve is a large nerve that is made up from several smaller nerves that come out from the spinal cord in the lower back. It travels deep inside the buttock and down the back of the leg. There is a sciatic nerve for each leg.

The irritation or pressure on the nerve next to the spine may also cause pins and needles, numbness or weakness in part of a buttock, leg or foot. The exact site and type of symptoms depends in which nerve is affected.

Cauda equina syndrome-it is an emergency.

This syndrome can cause low back pain plus: problems with bowel and bladder function (usually unable to pass urine), numbness in the ‘saddle’ area (around the anus), and weakness in one or both legs. This syndrome needs urgent treatment to preserve the nerves to the bladder and bowel from becoming permanently damaged.

What are the treatments for a prolapsed disc?

in back ache, back pain, clinic near me, Disc prolapse, doctor near me, Marathahalli, Munnekolala, pain when you bend, physician near me, sciatica, slip disc